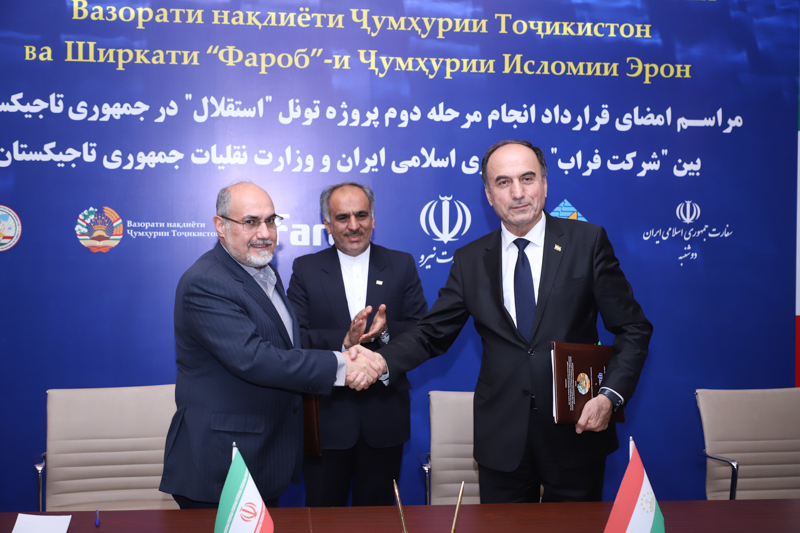 The contract for the construction of the second phase of “The Esteghlal Tunnel” in Tajikistan was signed by the Minister of Transport of Tajikistan and the Managing Director of the Farab Group in a ceremony attended by officials from the Islamic Republic of Iran and Tajikistan in Dushanbe.

According to Public Relations Of Farab Co.,at the signing ceremony of the contract for the construction of the second phase of the Esteghlal Tunnel, which was held on January 20, 2021, at the Hilton Hotel in Dushanbe, Tajikistan, the Ambassador of the Islamic Republic of Iran in Tajikistan, Deputy CEO of Iran Water and Power Resources Development Company,  and a group of senior officials from the Tajikistan Ministry of Transportation were present, The contract for the second phase of the Esteghlal tunnel project was signed by Tajikistan Transport Minister ,”Azim Ibrahim” and the Managing Director of the Farab Group,” Ali Vakili”.

“Ali Vakili”, the Managing Director of the Farab Group, said at the ceremony: “Farab is one of the largest and most experienced Iranian technical engineering companies that has recorded very good and brilliant experiences and records in its record, in domestic and international projects in the field of Hydro and Thermal Power Plants, Railway industries, Oil , Gas and Petrochemical, Construction and water industries.

Regarding the history of Farab activities in Tajikistan, he said: “Farab Group has designed, built and operated the large Sangtuda 2 Dam and Power Plant, which has been a symbol of friendship and deep and inseparable bond between the two nations of Iran and Tajikistan for many years, and fortunately, this valuable engineering achievement now plays an important role in providing the energy needs of the Republic of Tajikistan.”

Tajikistan’s Minister of Transportation “Azim Ibrahim” also said at the ceremony that the Esteghlal tunnel has a long history and its construction began in the former Soviet Union but was not completed for various reasons. He said that the implementation of the second phase of the project was delayed for some reasons, adding: “It is important that we are here today to sign the contract and within the framework of this document, measures are planned such as lighting, ventilation, firefighting, installation of surveillance cameras and etc that are important for the effective operation of the tunnel, and will be done by Farab Company.

The Esteghlal tunnel project is located about 70 km north of the city of Dushanbe on the Dushanbe-Khujand road and provides land connections between the north and south of Tajikistan.

Last year, in the framework of the Memorandum of Understanding between the 13th Meeting of the Joint Commission of the Islamic Republic of Iran and the Republic of Tajikistan and the Memorandum of Cooperation on the second phase of the Esteghlal Tunnel project between the Ministry of Energy of the Islamic Republic of Iran and the Ministry of Transportation of the Republic of Tajikistan, it was decided that considering Farab’s successful experience in Sangtuda 2 power plant and appropriate technical-financial facilities, with 50% participation of Farab company in financing the required amount, execution of works and design activities, supply and installation of ventilation, lighting, safety and firefighting systems of the project to be done by Farab company.